In reviewing my past year's writings on Mt Etna wines,
two gaps became readily apparent: (i) no coverage of the region's main grape varieties and (ii) no profile of, arguably, the DOCs most important estate, Tenuta Delle Terre Nere. I address the latter of these two gaps in this post.

Tenuta Delle Terre Nere (DTN) is located in the township of Randazzo on the north flank of the mountain and owns 30-ha of vineyards distributed between 10 parcels in four crus between that town and the village of Solicchiata.


The estate is owned by Marc de Grazia, he of Barolo Boys fame. Marc came to the world's attention as the leader of a band of young winemakers who had upended the traditional world of Barolo. Prior to de Grazia's intervention, Barolo wines were subjected to lengthy maceration in large wooden vessels and required significant aging to become approachable. Marc encouraged a group of young winemakers to adopt the French style of shorter maceration periods and aging in barriques in order to make the wines approachable earlier.

This approach -- dubbed the "modern style" -- was anathema to the traditionalists in Barolo and many a relationship was fractured as a result. Marc was undeterred by the waves and took these winemakers on tours of their markets, a practice not heretofore common to the region. These marketing tours served to forge links between the winemakers and their customers and led to significant market growth for this new style of Barolo and to de Grazia becoming one of the most influential importers of Italian wines in the US market.

Marc came to Mt Etna in the early 2000s and was energized by the potential that he saw. According to Brandon Tokash, my good friend and the repository of Mt Etna institutional knowledge, "Marc started bottling under his own label of Terre Nere with the 2002 vintage, a small production vinified and bottled at Benanti. 2003 was a bigger bottling though still at Benanti. 2004 was the first vintage actually bottled at Marco' estate.

According to Nesto and di Savino (The World of Sicilian Wine), de Grazia had a number of advantages coming out of the gate:
I visited DTN last year during Contrada dell'Etna and had the pleasure of being taken on a tour of the facilities by Marc and participating in a tank-tasting with him and a bottle-tasting with his winemaker. 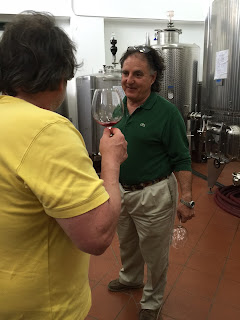 Marc's vision of the Etna DOC is as a region on par with the Côte de Nuit region of Burgundy with cru areas resulting from differences in soil types, altitude, exposure, and micro-climate. He has been an untiring proponent of cru-labeled wines and follows that principle with the grapes for his wines. DTN vineyards are located in the following crus (contradas in Mt Etna).

The estate is farmed organically and focuses on vineyard management and will purchase grapes from growers who adhere to those principles. In addition, the estate has a long-term lease on a 4-ha plot. 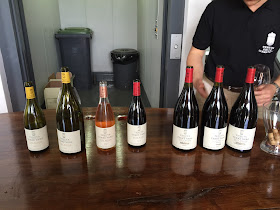 I will be hosting a tasting of the wines of this estate next week and will report on the individual wines post that event.