On our return to Mt Etna (after a number of estate visits in the broader East Sicily), I spent the night at the Barone di Villagrande Resort -- co-located with the winery -- to facilitate an early morning cellar visit and tasting.


Due to a very late arrival, I had not seen the property layout. I was floored when I went outside the following morning. The Resort provided a perfect vantage point from which to view the beauty of the multi-level amphitheater that was the vineyard. 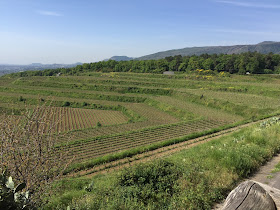 Brandon was waiting in the courtyard so we stepped into the dining room for breakfast; and were immediately greeted by the warm, welcoming smiles of the office staff, a scene which was repeated every time I came into contact with a different member of the staff.

Marco Nicolosi (the owner and winemaker) was not in town so the visit was led by his wife, Barbara Liuzzo. She was ably assisted in this effort by Sebastiano Nolasco (Assistant Winemaker) and Giuseppe Rapisarda. We began the visit in the cellar but my initial line of questioning dictated a shift back outside to contextualize the source of the grapes.

The Barone di Villagrande estate has been growing grapes and making wine at the same location in Milo since 1727. The estate farms 14 ha there for its red, white, and Rosato wines and a smaller vineyard on the Island of Salina for the production of its Ripasso Malvasia (2400 bottles).

Because of its elevation -- 700 m on average -- maturation periods are lengthy with a relatively late harvest. The lengthy maturation period increases the complexity of the fermented wine. The altitude also contributes to a 30-degree differential in day-night temperatures in the spring and summer, aiding aroma and acidity retention. The area is subject to significant rainfall with an average of 1500 mm/yr. A steady wind aids in drying out the crop post rainfall events.

In describing the soils upon which the Villagrande vines are planted, the staff mentioned that they were the beneficiary of the formation of the valle del bove. According to their understanding, and supported largely by at least one scholarly reference, the valle del bove was formed by the collapse of a dormant volcano. The collapse of the dormant volcano resulted in landslides which carried debris as far as the coat. The Villagrande location benefited from deposits of some of this complex soil as it worked its way towards the sea. The Villagrande soil is rich in iron and copper and has adequate amounts of potassium, phosphorous and magnesium. It is poor in nitrogen and calcium-free.

Varieties planted in Milo are the white indigenous grape Carricante as well as Nerello Mascalese, Nerello Capuccio, and Nerello Mantellato. The international varieties Merlot and Chardonnay are planted to support what Barbara calls family wines: Sciara (80% Merlot and 20% Nerello Mascalese) and Fiora (90% Carricante and 10% Chardonnay). The average vine age is 40 years with the vines trained, for the most part, Guyot, cordon-spurred, and the scion resting on 1103 Paulson rootstock.

The estate was certified biologic in 1989 and uses nature to combat vineyard pests and diseases. Strategically positioned bushes on the margins and at transition points in the vineyard provide a natural habitat for flora and fauna. Forests to the southeast and east provide protection from offshore winds. Trees from these forests are used as sources for chestnut barrels with the wood dried for 4 to 5 years at Villagrande before being sent off to Trapani in Marsala to be finished. Some sulfur is used from time to time to combat mildew. 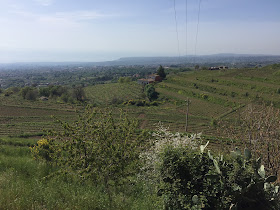 Villagrande plants 3 ha of Malvasia delle Ripari on Salina Island for the production of a passito style wine from sun-dried grapes.

The cellar was built in 1858 to help realize a vision of dual production lines. Prior to its construction, everyone made a Rosato by blending red and white wines. Barone di Villagrande knew that it made a great white wine so decided to build this cellar to allow two production lines. The vats were built in place and the cellar built around it. The vats are made of chestnut and are either 22,000L, 18,000L, or 500L.

Harvesting is done by hand and the appropriate date is set based on sugar:acid ratios (the estate seeks a 2:1 ratio). Selection is done in the field. The wines produced by the estate is shown in the table below.

At the completion of our cellar tour, we repaired to the courtyard where a table had been set up -- overlooking the vineyard -- for us to taste through the wines. Each wine was paired with a suitable accompaniment.

The first wine tasted was the 2011 Malvasia. It was paired with an aged, honeyed sheep's milk cheese and a potato concoction with olive oil and Sicilian onions. The Malvasia had been sun-dried for 20 days in order to reduce the water content while retaining the natural sugar levels. It was a light golden color and had a slight matchstick nose. Dried herbs, dried figs, and sweet white fruit are recalled. The honey on the cheese complements, while its saltiness contrasts, the Malvasia.Twenty four hundred bottles of this wine are made annually.

The 2015 Etna Bianco Superiore was paired with green olives (grown on the property), olive oil, and bread. The wine exhibited white peach, white pear, white pear skin, and a vegetality. Savoriness and dried herbs also evident. On the palate, clean, lean, and austere with a slight green note. An average of 300,000 bottles of this wine are produced annually.

The Etna Rosato 2015 (3000 bottles) was paired with dried tomatoes plus a cold soup with a crunchy ham topping. Strawberries on the nose of the Rosato. Beautiful texture and taste. Strawberry richness. Lemony-lime acidity, a spiciness, and late-arriving, rear-deposited tannins. The acidity bursts on the palate. A mineral, clayey, chalky finish.

The Salina Bianco is made from a blend of Malvasia delle Lipari (40%), Ruxignola, Cattaratto, and Insolia. Aromatic with rosemary and green herbs evident. Thick and rich on the palate but dry. A grapefruit tanginess.

The Etna Bianco 2014 has sweet white fruits on the nose along with white fruit skins and golden apples. Layered. Citrus reigns on the palate. Good acidity. Juicy.

The 2012 Etna Rosso was unctuous with faded sweet strawberries, red plum, nutmeg, dried herbs, dried bark, and mahogany on the nose. Great weight on the palate along with strawberry, raspberry, and spice notes. Great acidity. Long, dried herb, spicy finish. The tannins and acidity tell of a long life to come.

This was an extremely pleasurable morning. Barbara and her staff were unequalled. The estate has a story to tell and the wines are telling it. Oh, by the way, Brandon had a great time.