I was scheduled to visit the Rioja region in late April with a wine friend and decided to extend that trip to include the Galloni tastings in London when they were announced. As it got closer to the travel date I began thinking that I had been to Rioja before and, if I were to be in Europe, maybe I should visit someplace I had never been before. So I told my friend we would go to Mt. Etna instead.

I messaged Brandon Tokash (my new best friend whom I had met during the 4th Winelover Anniversary Celebration in Athens; and a resident of Mt. Etna) and told him that I and a few friends would be coming for the weekend in question. He said "you can't come to Mt Etna and not visit the broader Sicily." And recommended that I stay an additional two days to visit non-Etna Sicily. I agreed. I would come in two days before my crew and Brandon and I would do Sicily and then return to visit the Mt Etna wineries with them on the weekend.

Then Brandon said if you are going to be here earlier in the week, then you might as well come early enough to participate in Contrada dell'Etna -- an event showcasing all of the producers on Mt Etna -- on Monday of the week. Oh, and by the way, if you are going to Contrada dell'Etna, you might as well attend the blind tasting at Cave Ox on Sunday night. And that is how I came to be at Cave Ox on Sunday night participating in a blind tasting.

The tasting was comprised two flights -- one of five bottles, the other of seven -- and was led by Valeria Capriotti of Bevitorio Independanti and Gaetano Saccoccio of naturadellecosa.com. They had chosen to run the event as a blind tasting to dispense with the baggage that is attendant with the label being known to the taster. When the identity of the wine is unknown, the taster can focus on characteristics of the wine based on the nose and mouth rather than on the eyes. 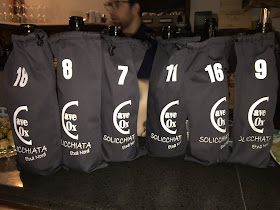 Cave Ox is set off to the left within a walled enclosure. The empty space to the front is set up with outdoor seating and the area beyond that is a rustic, park-like setting which is itself peppered with small sitting areas. A number of folks were sitting and standing around talking in that forward sitting area as we walked in and Brandon proceeded to greet and talk with every one of them. It took us literally 30 minutes to work our way from the entrance of the property to the area where we would eventually be sitting. And Brandon shook every hand, hugged every chest, and kissed every baby in the room before we got there. This guy should be running for Mayor. Or something.

The event was fully subscribed. There were three or four tables running parallel to each other in the main dining room and additional tables in the alcoves off the dining room. The tables were pretty narrow and the chairs were packed in pretty closely so you got an up close and personal view of how sardines feel when they are placed in a can. 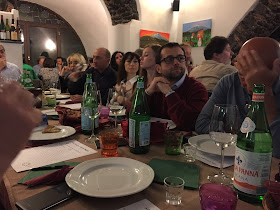 I had had some apprehension as to how things would go down as the tasting was going to be conducted in Italian -- my knowledge of which is limited to the names of a few wine producers in Barolo and Montalcino -- and I did not want to be overly burdensome to Brandon by having him feel that he had to close-mark me to limit my discomfort. All my misgivings melted away, however, when I saw Gae. I recognized him from the streets of Williamsburg in Brooklyn. He was a hipster (based on his appearance); and those are my people. Everything was going to be ok.

The opening statement was made by Valerio. It was fairly lengthy, but it held the attention of the attendees.  Based on Brandon's commentary, he seemed to be drawing a contrast between between natural wines and non-natural or, as he termed it, a "bastardization of wine." After Valerio had completed his spiel, Gae stepped into the batter's box for his turn. We then got down to the business at hand.

The room was humming and buzzing with wait staff moving around pouring the wines , with the multitude of camera persons scurrying around taking candid shots, and the cacaphony of conversation of an anticipatory audience. The first wine was poured and a silence descended on the room as attendees brought their attention and focus to assessing the wine at hand. After the first few sniffs and slurps, the noise level began to rise as folks began describing their sensations and hazarding guesses as to what the wine was. The young man sitting directly across from me made an impassioned case for his choice. And it was eventually revealed that his choice -- a white from Campania; and way off the path that the other tasters were going down -- was the correct one. 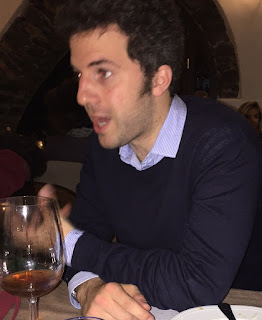 This process, including dialog and commentary from the floor, was repeated for each wine in the first flight.

Cave Ox is particularly well known for its pizza and, after being served an attractive and tasty antipasti, we were treated to a succession of evermore enticing, straight-to-the-hip pizzas. And, constantly helpful as he was, Brandon informed me of the names and ingredients of each pizza and the attendees and their winery association (By the way, many of the attendees were winery owners, winemakers, or involved in wine in some way or the other). 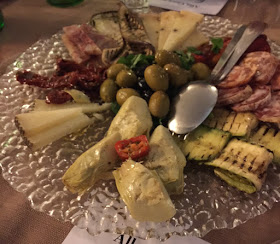 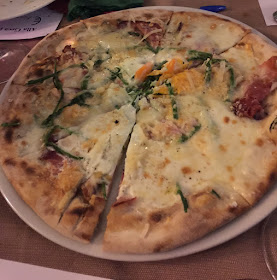 At the completion of the first flight, the wines were revealed one at a time. Each reveal was followed by a fairly animated dialogue between the attendees and the floor. I am sure that it was all very informative.

At the end of the day I did not know any of the wines in the lineup but the entire experience was eye-opening. There was a lot more interaction and engagement of the audience in this format than in a traditional non-blind, speaker-led tasting. And the format truly forced me to use my senses to ferret out the characteristics of the wine even though I had no benchmarks to compare them against.

I was also very impressed with the dialogue towards the end of the tasting. Given that the audience was comprised of the leading wine makers and chefs in the region, a major philosophical debate broke out at the end. I could not understand the words but I got the emotion and the deep-seated convictions. I wish I could have been a fly on the wall.